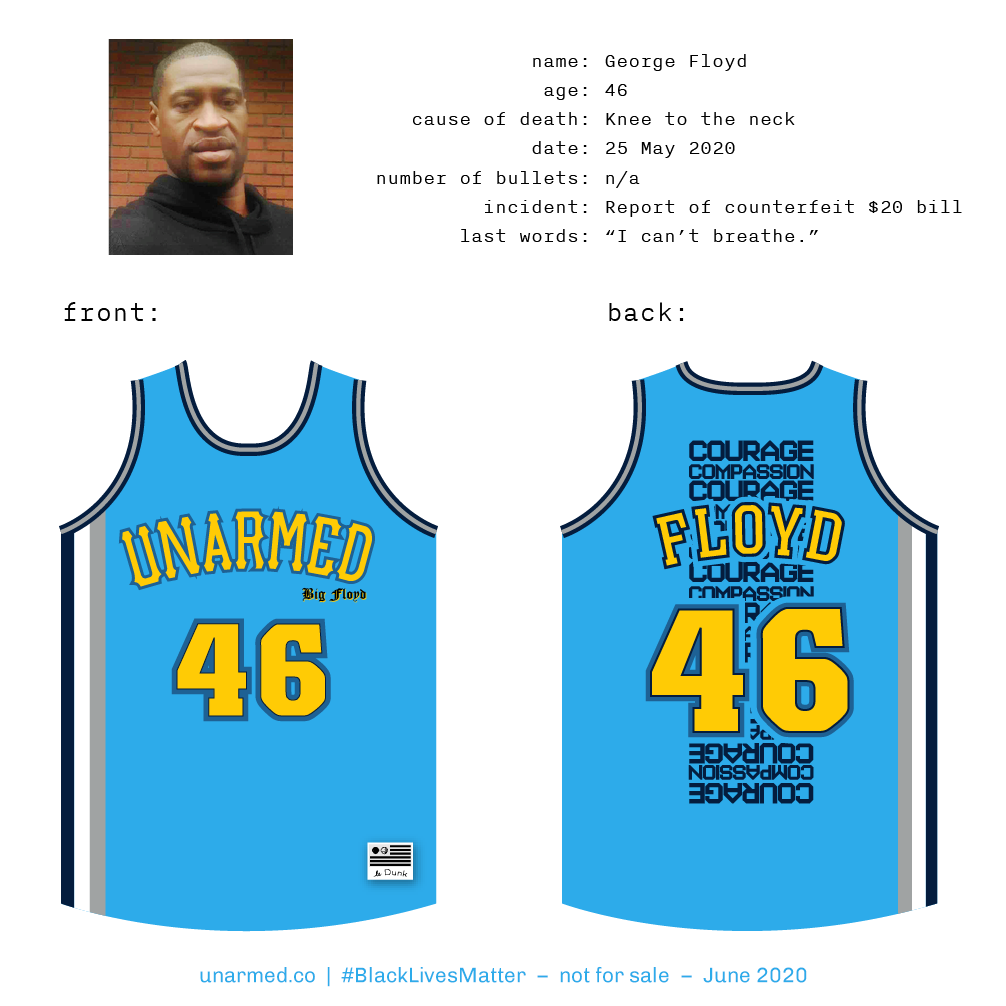 Believe me, the last thing I’d rather be doing right now is designing another jersey and posting it on this website. I started this project in 2013. That’s a lot of tears spilled over Adobe Illustrator. A lot of marches and grief. And so I let a few go by – Walter Scott, Philando Castile, Breonna Taylor – sounds so callous, doesn’t it? But isn’t that what we all do?

Three of the jerseys appeared in my film 72 Hours: a Brooklyn Love Story? – isn’t that enough?

Last year around this time I interviewed Dr. Tiffany Crutcher, Terence Crutcher’s twin sister, for a documentary I was directing about a separate topic related to race. The Terence Crutcher jersey was the last one I designed in this series, four years ago, on my birthday. Dr. Crutcher spoke powerfully in our interview about how she didn’t want her life to be about her brother’s killing, but how we must find the strength to raise our voices in the midst of pain.

And so my fingers quiver once again as I select fonts and Google details – did George Floyd have a nickname? where should it appear on the jersey? Bullets were easier to make into a design motif – stars – but how does one represent a knee and the crushing weight of racism? With a glyph? A line weight?

TO PROTECT WITH COURAGE
TO SERVE WITH COMPASSION

That is the motto of the Minneapolis Police Department. If you didn’t know that, know this. George Floyd – Big Floyd – was UNARMED.

What is the Weight of a Tweet?
AKA The Weight of Hate: my big theory of what happened in 2019 and maybe the whole decade.

Scenes from the Chestnut Hill Reservoir.

This film documents the installation of Into the Woods, which was created for the International Garden Festival at Domaine Chaumont-sur-Loire. In making the film I asked design principals Matt Donham and Phoebe Lickwar to voice their creative choices in building it, and some of the larger ideas at play in the field of landscape architecture. Last, I wanted the film to feel like an exchange with the garden, which unfolds to a visitor in its own time.

The Milwaukee Film Festival had me back for a screening of my documentary Legacy Lives On and a panel on the topic of entrepreneurship. Both were successes. Walking through a city robed in Fall’s majesty, however, was just as exciting.