Trying on a New Job Title 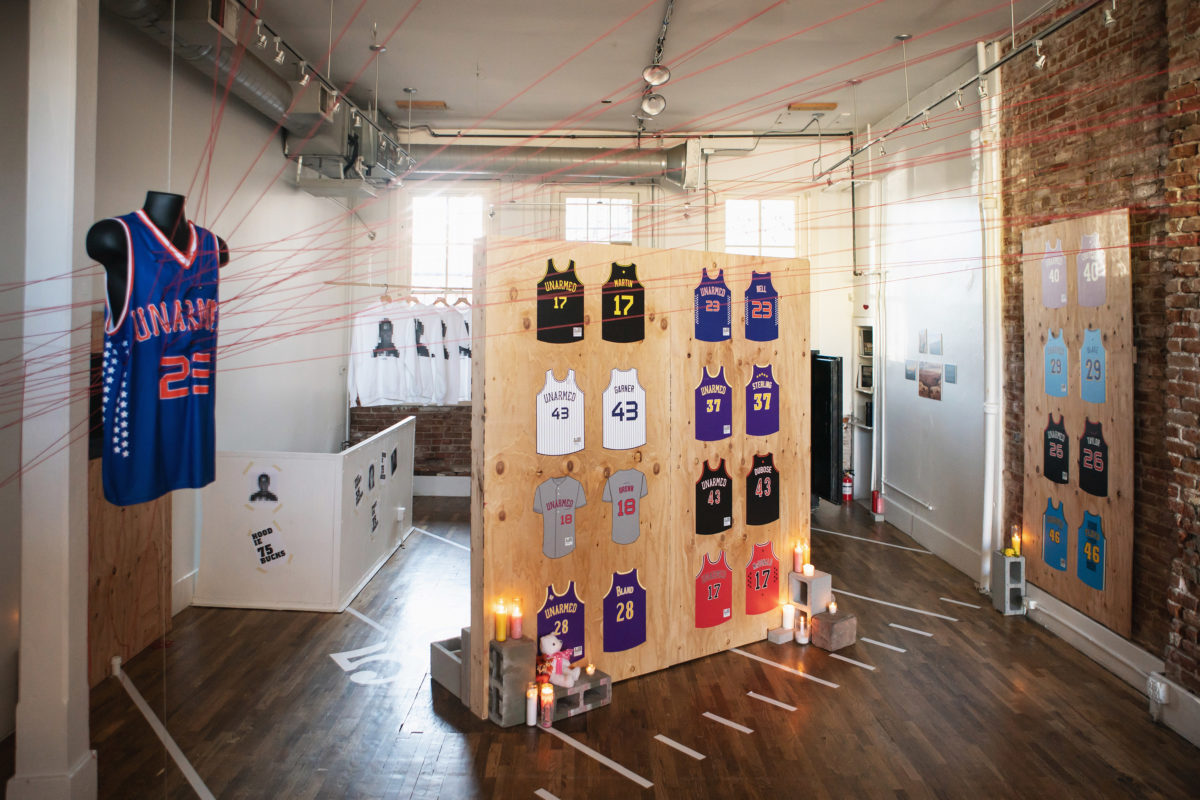 In the month of February I had my first solo show as an artist at Leon Gallery in Denver. The exhibition featured my work for Unarmed and a few images from my recent travels in the American Southwest. 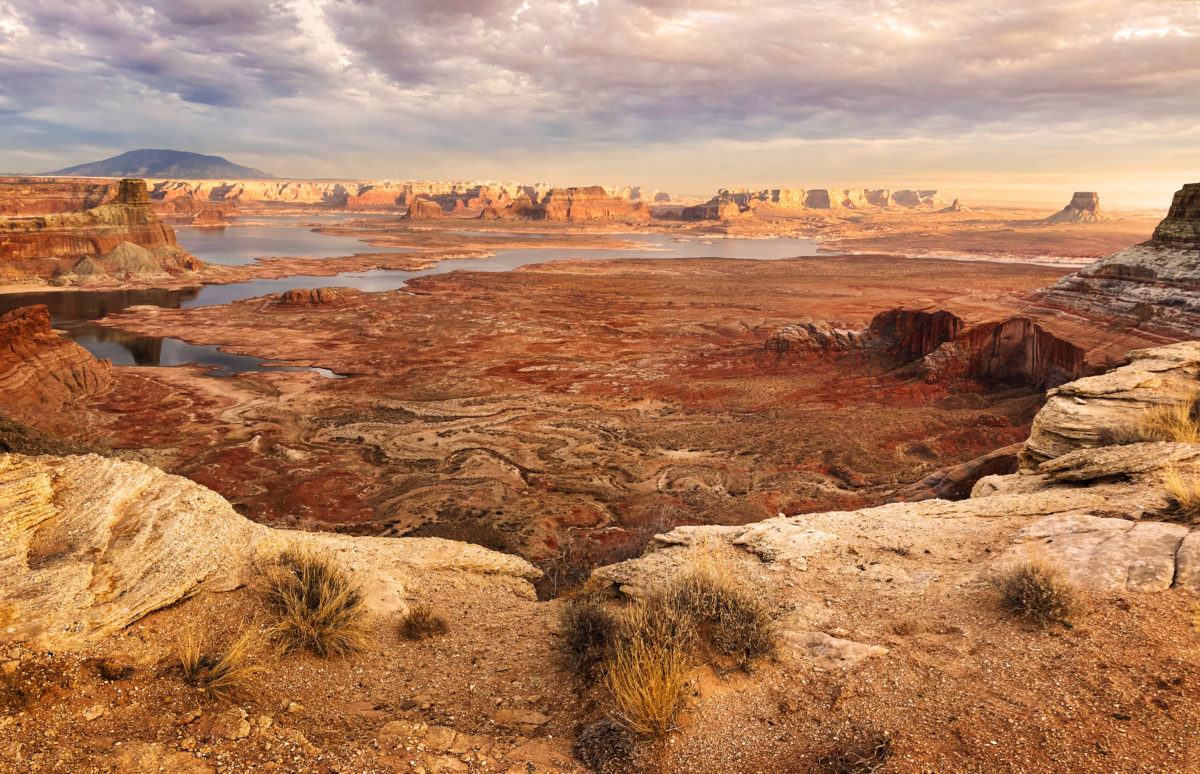 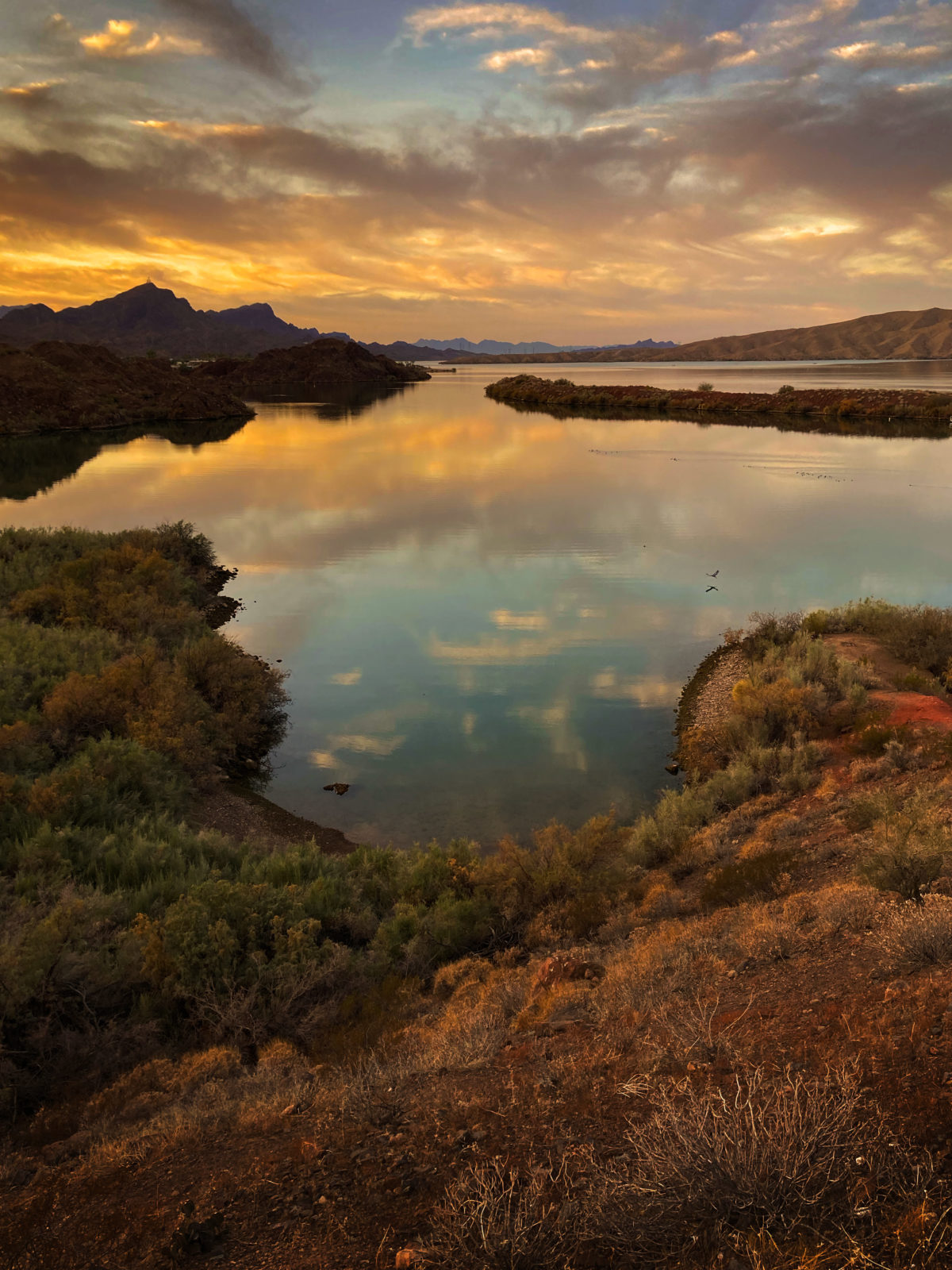 The pivot from ‘filmmaker’ to ‘artist’ has not been as daunting as I thought it might be, in part because it’s happening later in life when I have more confidence in my skillset, in part because much of the work I’m doing still involves cameras and editing, and in part because many of the skills I use in film are transferable. Designing a set for a character in a story, for instance, then breaking that story into shots that the viewer might appreciate, is not unlike designing the experience for a visitor moving through a physical space.

The other thing that makes it easier to do this work is that most of my film clients stopped hiring me during the pandemic. Creative is as creative does, and staying active, making things, is as embedded in my process as any external provocation like cashflow. Work will come out of my body whether someone is paying for it or not. And it feels like this work has been wanting to come out of me for a very long time. 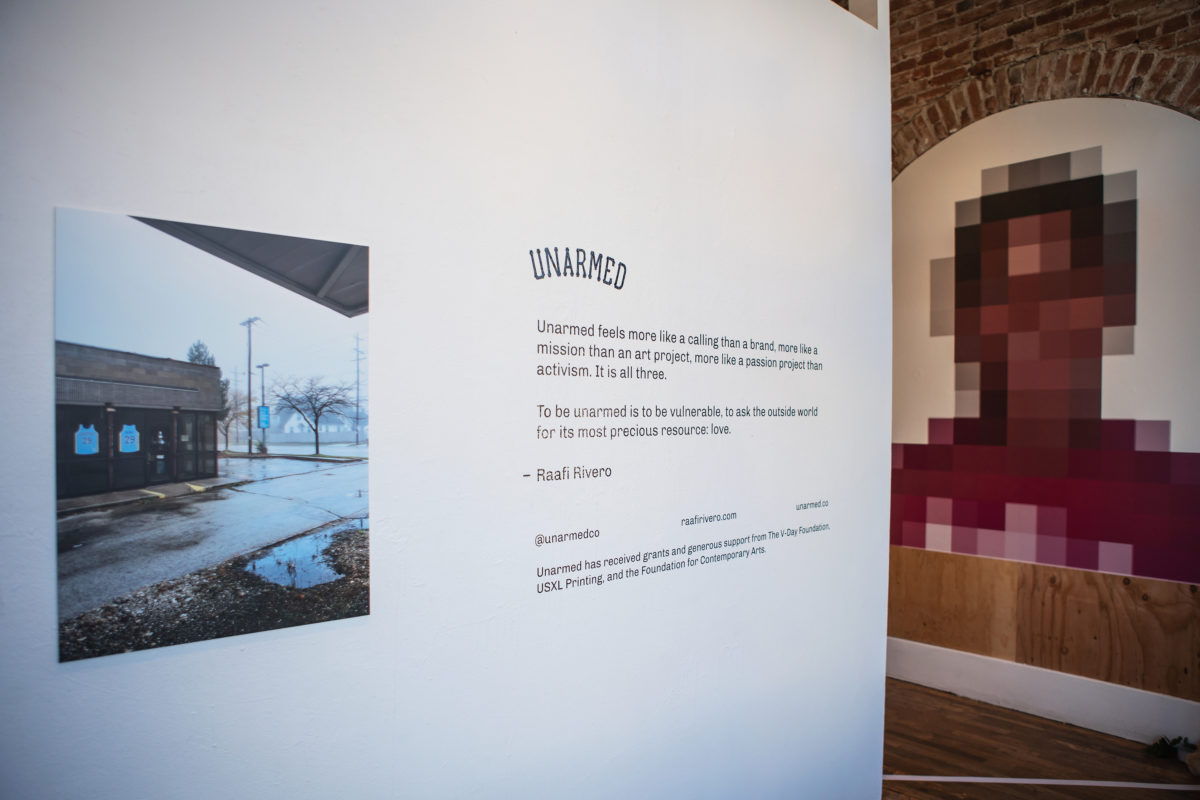 To be unarmed is to be vulnerable, to ask the outside world for its most precious resource: love. 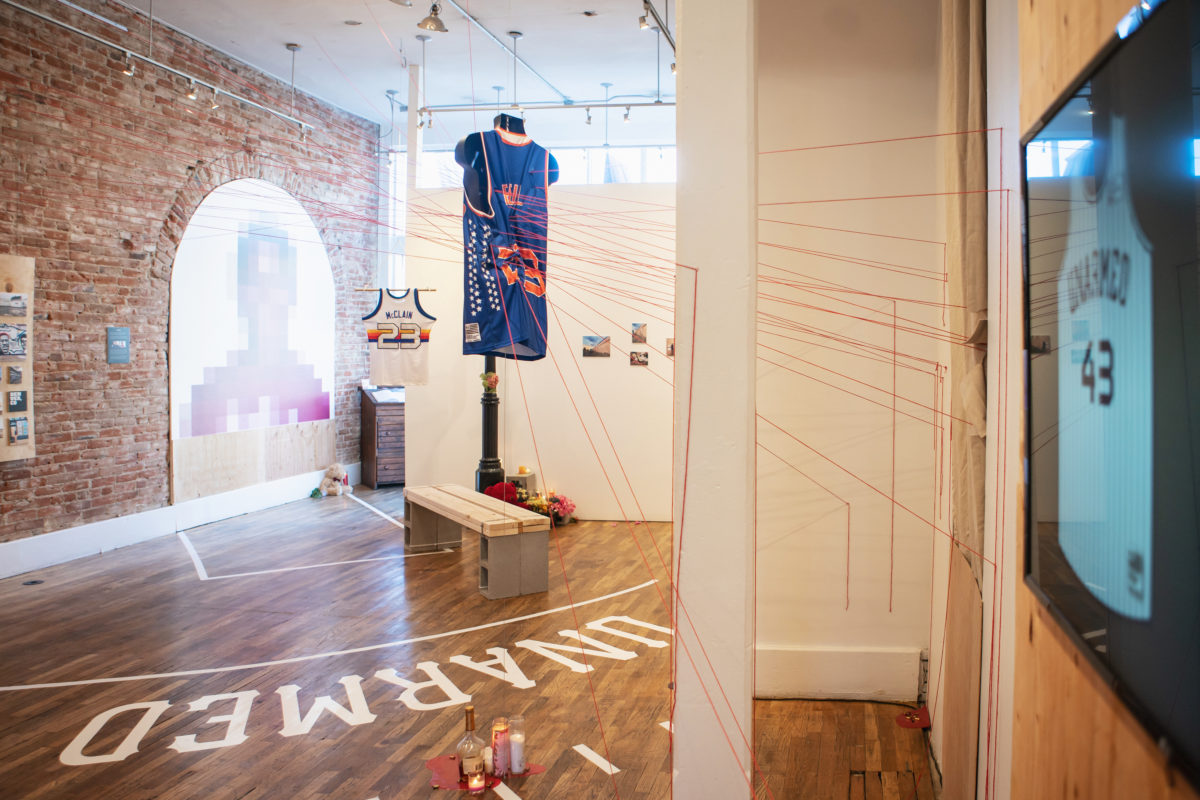 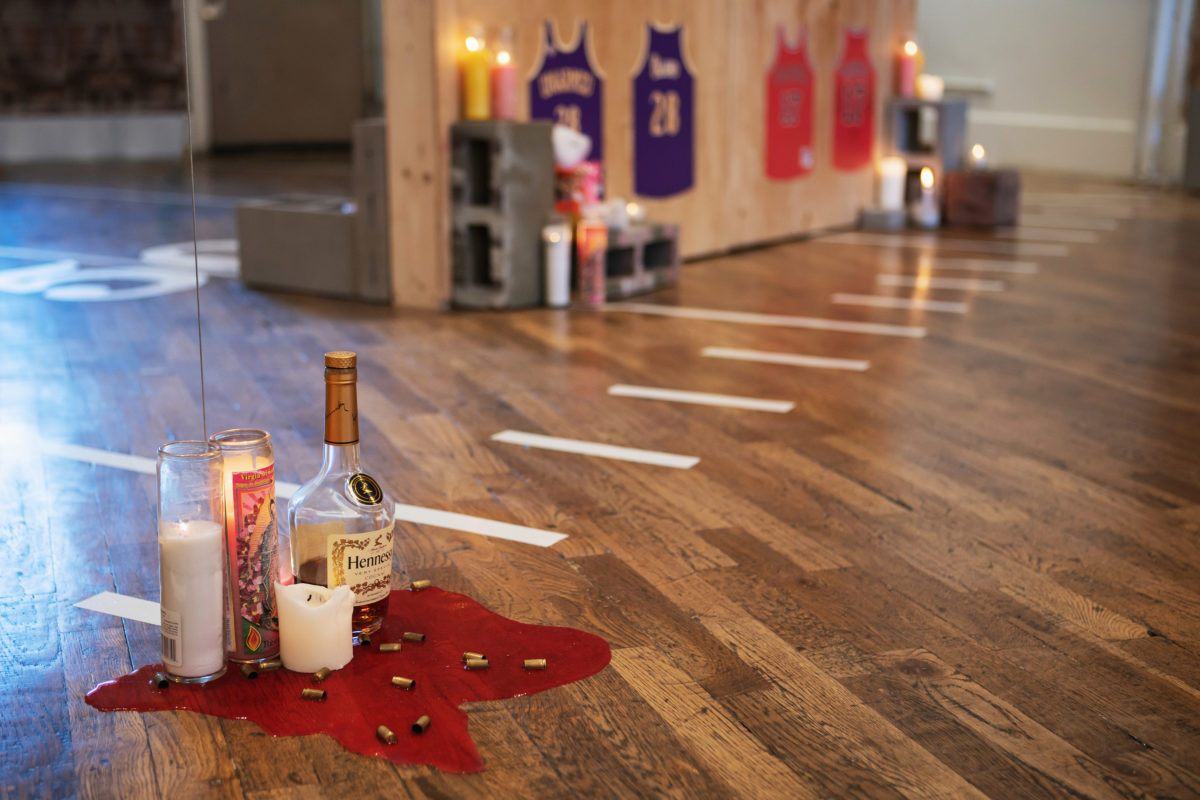 The Hennessy bottle I added to the Sean Bell memorial within the show is a reference to the empty bottles one sees at street memorials in Brooklyn. Many such bottles can be seen at the Sean Price memorial mural that I photographed a few years ago.

One interesting wrinkle is that the physical garment of the Elijah McClain jersey – the item that took the most time and effort to produce – was not the signature moment in the exhibition. Unarmed jerseys, produced as garments, will have their own moment and I look forward to bringing them to the forefront. Similarly, I created a photo wall of images taken during my tour last Fall of cities that have experienced the trauma of racist police violence. While it may have been possible to build an entire show out of those images, they were just one beat in the story of this exhibition. 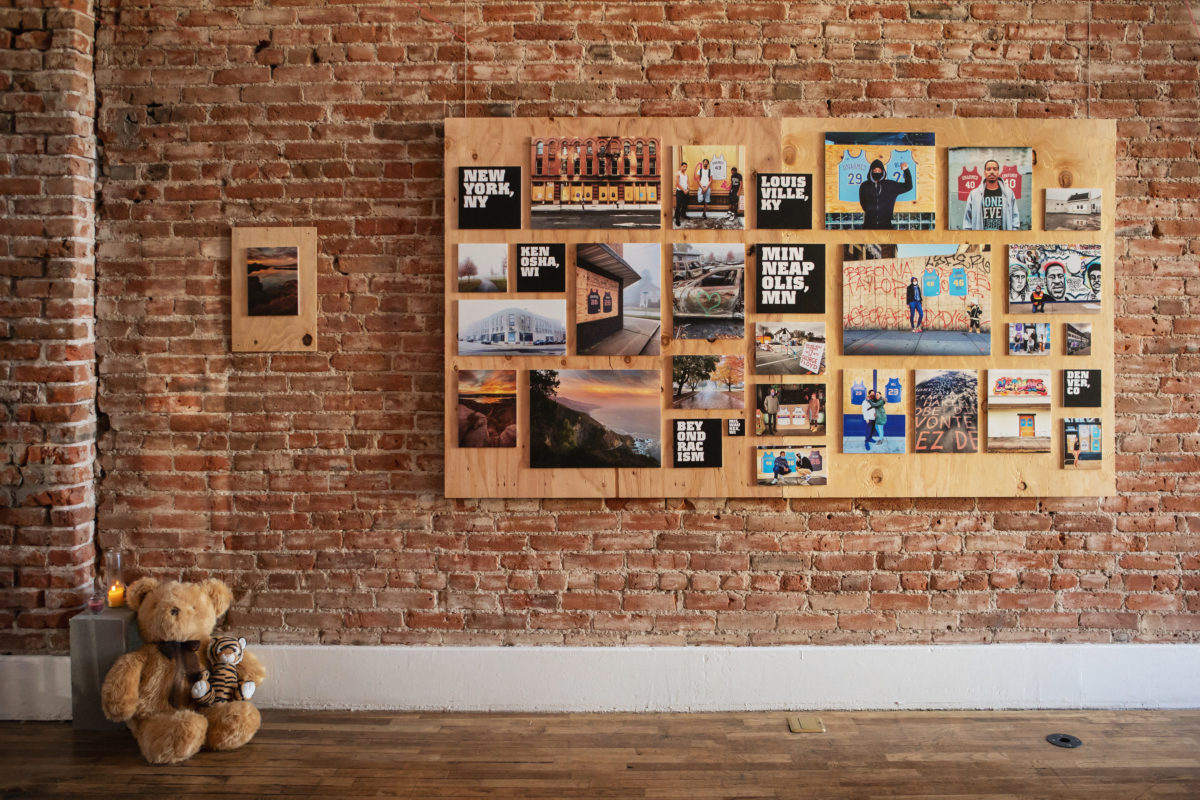 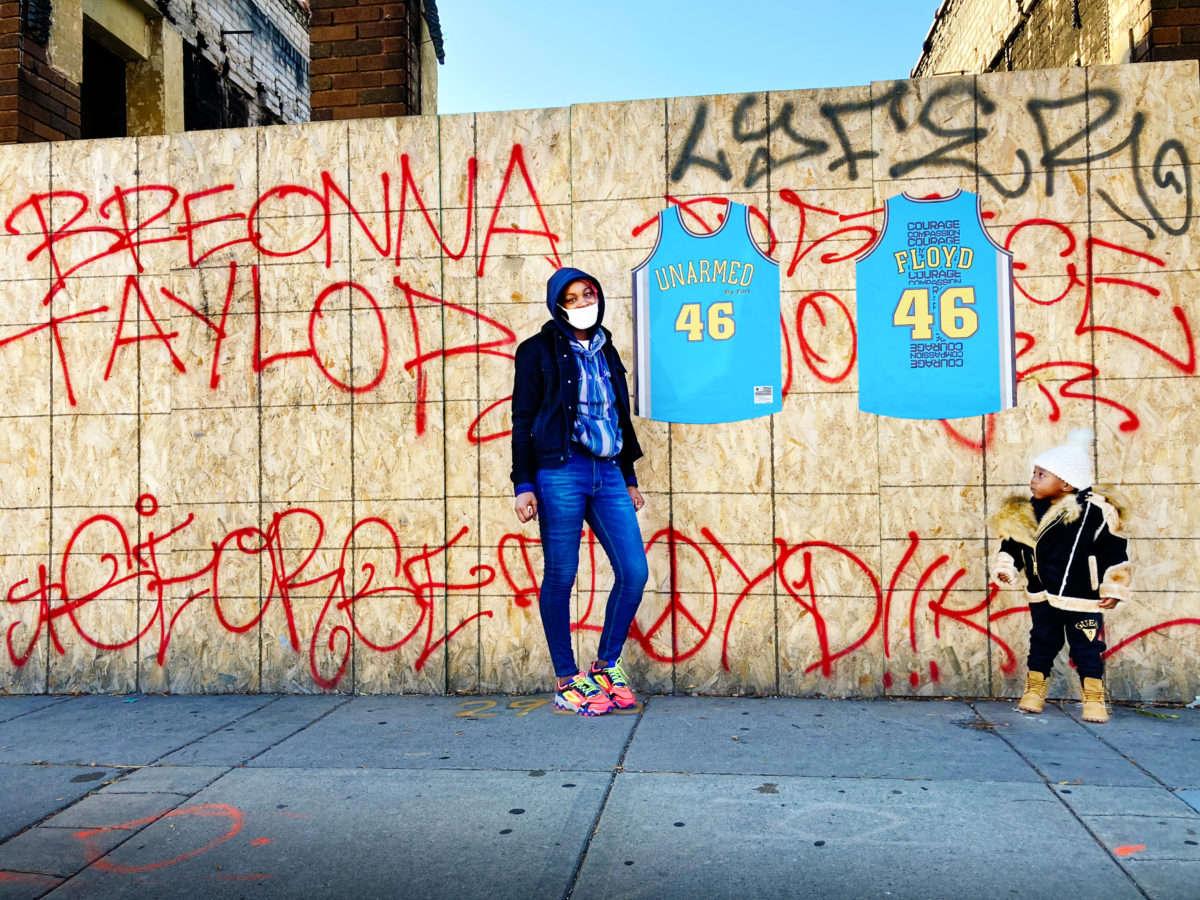 What I most enjoyed about designing the space was seeing a vision come to life over the course of an iterative process. PDFs, spreadsheets, emails, and conversations were as useful as Adobe Photoshop. It was satisfying to see ideas I’d mocked up on a laptop rendered into three dimensions. Robert Pietri and Rick Gonzalez, my collaborators in turning Unarmed into a brand, made excellent contributions as well. Together with one of the gallerists, the four of us installed the show by hand. Building walls and benches, applying vinyl to surfaces, hanging things from points on the ceiling. And there were small touches that I designed ad hoc, in the space, the grace notes. 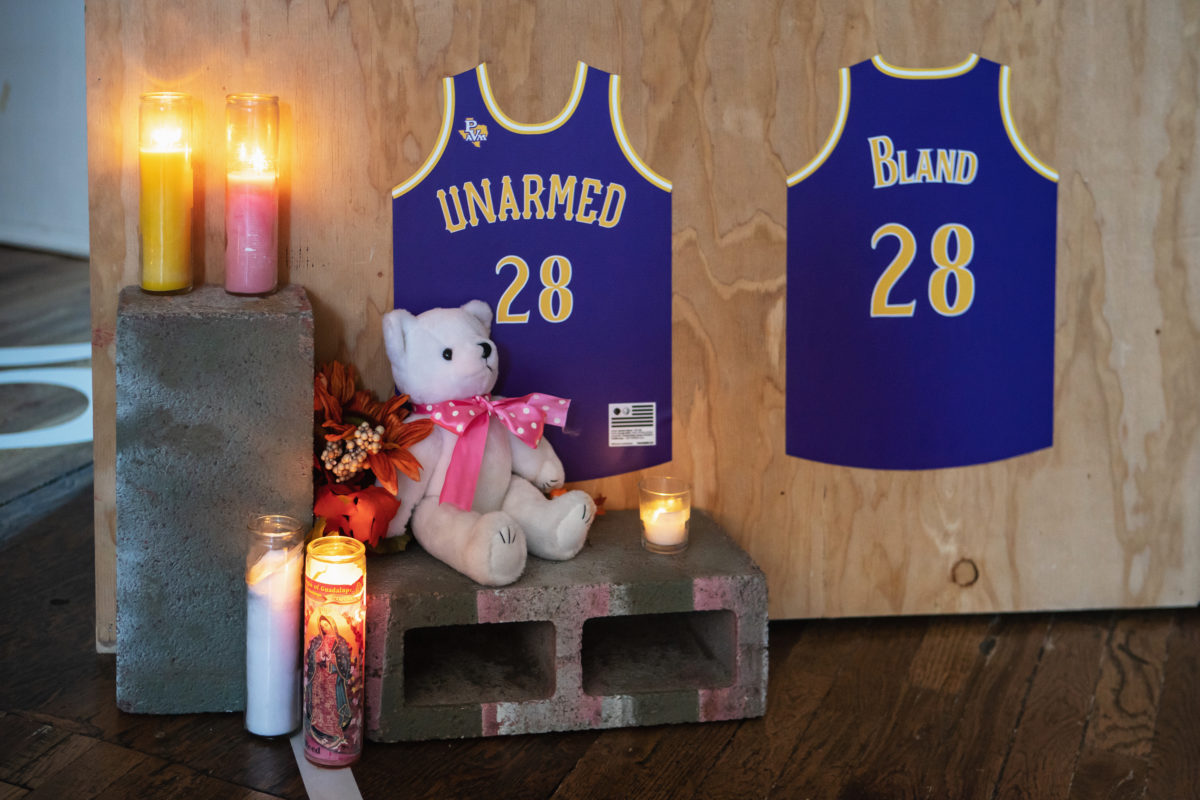 One such moment came from looking at a shaving of wood. We’d cut a piece too wide and the curled shaving was too beautiful to throw away. It sat in the corner of the gallery for a day or two, looking pretty, until I figured out a way to use it, laying it over a cinder block that anchored the wall of jerseys. When I signed the other corner of the wall with my graffiti tag – the show felt complete. 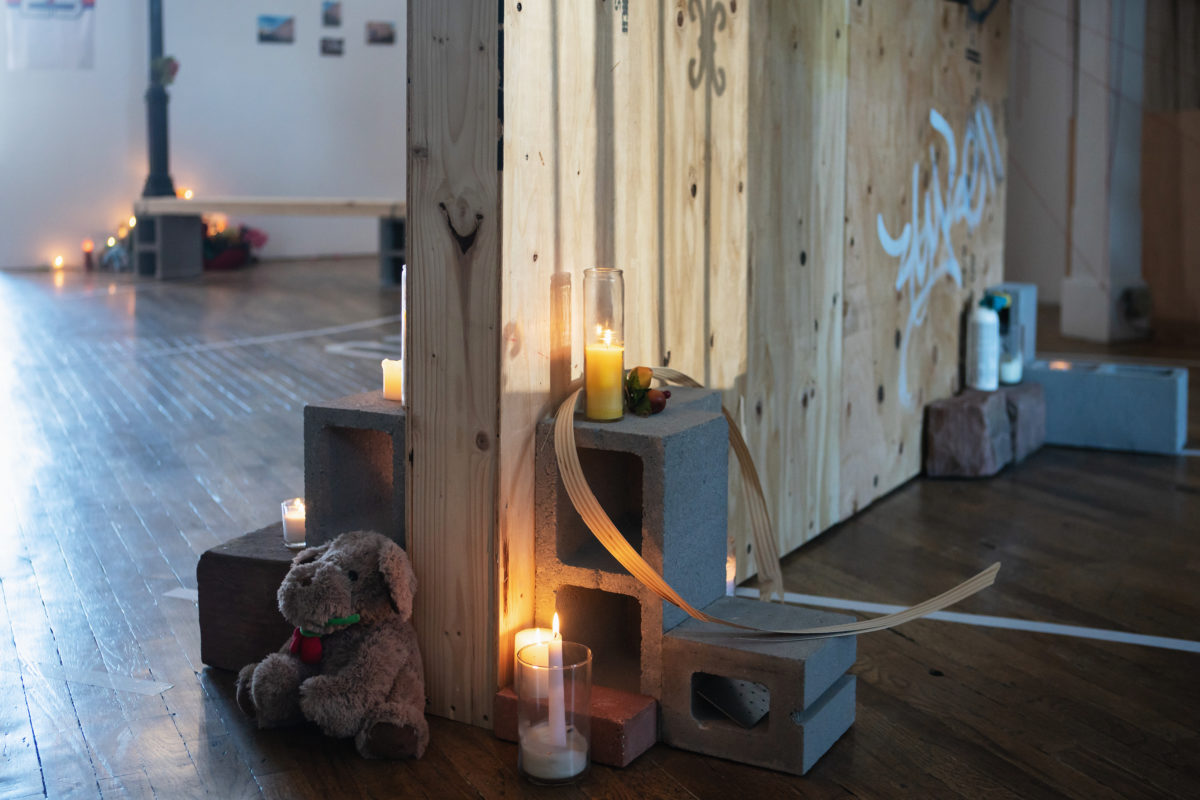 —
A few notes: Here’s a partial video walkthrough of the space. All images from inside Leon Gallery by Amanda Tipton Photography. The Fall Tour that formed the basis of much of the image-making in this show was sponsored in part by a grant from the V-Day Foundation, and generous donation by USXL Printing. Vinyl jerseys and images inside the gallery were printed by Eye Candy Graphics, and sponsored by an emergency grant from the Foundation for Contemporary Arts.